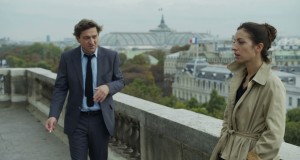 This suspenseful drama addresses artwork stolen by the Nazis and the difficulties facing family survivors attempting to reclaim their rightful property. French Jewish journalist Esther discovers that a painting recently acquired by her art dealer husband has a mysterious connection to her family. Esther falls into a dangerous maze of deeply hidden secrets. Chastised by her uncle, discouraged by her father, suspended from her job and accused of insanity by her husband, Esther plods forward, piecing together clues until the shocking truth is revealed.