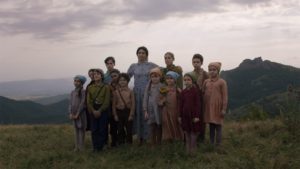 Nazi-occupied Crimea, 1944.  A boy named Itzhak turns to Saide Arifova, a local Tatar Muslim woman, for help, explaining that he and a group of other Jewish orphans are hiding from the Nazis. Arifova faces a moral dilemma: should she try to help them or save herself by refusing? Despite the impending danger, she decides to protect the children by hiding them in plain sight, and disguising them as Tatars and adopting them into the local community. Based on an incredible true story, “87 Children” celebrates the bravery of a single woman and pays testament to the ingenuity and gall that allows us to survive in the unlikeliest of circumstances.