In the Shadow of the Acropolis: Film & Talk-Back with Filmaker Laura Zelle 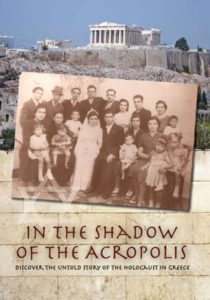 Discover the compelling story of an ancient Jewish culture – the Romaniotes – that was almost totally annihilated during the Holocaust. Told through the eyes of one family that survived the Holocaust in Greece. The maker of this film, Laura Zelle, will speak about the film as well as her personal family story. Laura is descended from Romaniote Jews and her mother and grandmother are both Holocaust survivors. Laura is the founding director and CEO of Tolerance in Motion, a mobile educational experience dedicated to the prevention of discrimination and bigotry. She was the Director of Tolerance Minnesota, a program of the Jewish Community Relations Council of Minnesota and the Dakotas, as well as teaching elementary school for 15 years.