Survivors Club: The True Story of a Very Young Prisoner of Auschwitz 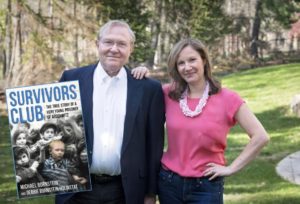 In 1945, in a now-famous piece of World War II archival footage, four-year-old Michael Bornstein was filmed by Soviet soldiers as he was carried out of Auschwitz in his grandmother’s arms. Survivors Club tells the unforgettable story of how a father’s courageous wit, a mother’s fierce love, and one perfectly timed illness saved his life, and how others in his family from Zarki, Poland, dodged death at the hands of the Nazis time and again with incredible deftness. Working from his own recollections as well as extensive interviews with relatives and survivors who knew the family, Michael relates his inspirational Holocaust survival story with the help of his daughter, Debbie Bornstein Holinstat. Shocking, heartbreaking, and ultimately uplifting, this narrative nonfiction offers an indelible depiction of what happened to one Polish village in the wake of the German invasion in 1939.

For more information contact Kari Altman at KariA@MilwaukeeJewish.org or 414-963-2716.