The Ninth Fort in Kaunas, Lithuania 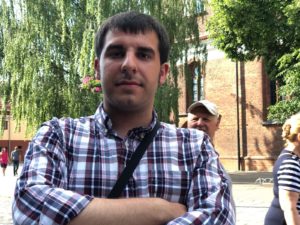 My name is Christopher Gauger. I graduated from the University of Wisconsin Oshkosh in 2017 with a major in History and a minor in Geography. This trip has been an amazing experience and an emotional roller-coaster, and it has been extremely eye-opening.

On June 2, we spent much of the day in Kaunas, the second-largest city in Lithuania and a popular tourist destination. The city is also home to a fortress complex that was built by the Russian Empire in the 19th century. The fortress was intended to defend the city against a German invasion. But one of its forts would attain a far more ghastly reputation. The Ninth Fort, located on the north side of Kaunas, was used by both the Soviet and Nazi regimes to carry out mass murder and oppression during the 20th century. When the Soviet Union invaded and annexed Lithuania in 1940, the NKVD used the fort to imprison, torture, and execute political prisoners. But the worst horrors were yet to come. In 1941, Nazi Germany invaded the Soviet Union. Lithuania was quickly overrun by the Nazis, who took control of the Ninth Fort and transformed it into a killing site. Tens of thousands of Jews from throughout Europe were sent to the Ninth Fort to be murdered in mass shootings as part of the Holocaust. Even after the Soviets retook Lithuania, the fort continued to be used as a site for repression by the post-war Soviet government. Today, the Ninth Fort has been transformed into a museum dedicated to its history both as a military fortress and as a site of oppression under both the Soviet and Nazi regimes. A dramatic monument to the Jewish victims of the Nazis now stands outside the fort.

The Ninth Fort shows that the Holocaust was not just limited to the extermination camps like Auschwitz-Birkenau or Majdanek or Belzec. Not all of the Jewish men, women, and children who were murdered were gassed and cremated. Many of the victims died outside the death camps, in mass shootings carried out in places like the Ninth Fort. And yet these shooting sites have attracted much less attention from the public than the death camps.

But the Ninth Fort fails to present the full history of the massacres that occurred there. Its museum neglects to mention the fact that ethnic Lithuanians participated in the Holocaust in Lithuania; they helped the Nazis carry out the mass killings of Jews. The museum portrays Lithuanians in an entirely sympathetic light. It claims that all of the atrocities committed in Lithuania during the 20th century were perpetrated by either the German Nazis or the Soviet Communists. The museum has an exhibit called “Lithuanians, The Saviours of the Jews” that discusses in detail how Lithuanians helped save Jews during the Holocaust. While it is important to acknowledge these rescue efforts, it is also important to recognize that not all people choose to be heroes, and that some people choose to be villains.

The Ninth Fort and the experiences of Lithuanians in the Holocaust and other 20th century atrocities demonstrate a clear example of how victims can simultaneously be victimizers. Lithuanians, as a nation, suffered horribly at the hands of the Nazis. And yet some Lithuanians willingly assisted the Nazis in murdering Jews. We must realize that history is not black-and-white, and we cannot truly learn from the past if we are willing to ignore or erase the parts we dislike.

Not all of our visit to Kaunas was dominated by such depressing topics as mass killing. During the afternoon, we visited the local Japanese consulate, where we learned about the story of Chiune Sugihara. He was a diplomat from Imperial Japan who was stationed at the consulate in Kaunas during World War II. Sugihara decided to save the lives of Jews by issuing them visas so they could travel to Japan, and from Japan they could travel to other safe havens around the world. Through his courageous efforts, Sugihara saved the lives of 6,000 Jews (five times the number saved by Oskar Schindler), despite considerable risk to his life, his family, and his career.

I was emotionally moved by Sugihara’s story, and I was filled with inspiration and hope for humanity. His story – and the stories of other heroic men and women who saved innocent people from the Holocaust – shows that in the face of overwhelming evil and seemingly impossible odds, good can prevail. Some people may choose to be villains, but others will choose to be heroes.