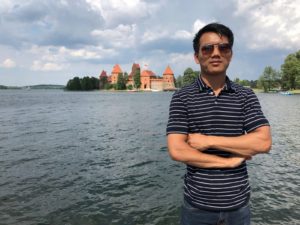 My name is Biak Cin Thang and I go to the University of Wisconsin Milwaukee. I am from Burma and majoring in Theology with a focus on perspectives of different religions around the world. In the previous semester, I took “Introduction of Judaism” and we focused on the Holocaust. That’s one of the reasons I came on this trip. The trip has been full of memorable moments.  Today was a day that I won’t forget.

It was our last day of our trip. We began with a short walk and took the city bus to the Holocaust Museum in Vilnius. On the way, we stopped in front of the wall which is across from the bus stop. The wall was built from tombstones taken from the Jewish cemetery. How? After the war, the Soviet Union took them and used them to build that wall. Today, the names, dates, and words on the tombstones are erased. No one knows whose names were on them and no one would realize the significance of that wall.

We continued our journey to the museum. There are two young men from Austria who volunteer and lead tours. According to them, there were no extermination camps in Lithuania, but only places where people were murdered by shooting.  More than 200,000 Jews and other people were murdered, including children, ill people, and elders. Before the Germans came to Lithuania, the Lithuanian began killing Lithuania Jews for no reason. They even killed their neighbors and friends. When I heard about this, I was shocked because I can’t even imagine why such a horrible thing can happen. In addition, there is a picture on the wall of the museum; the picture is of the family of Shay Pilnik. Dr. Pilnik, the Executive Director of the Nathan and Esther Pelz Holocaust Education Resource Center (HERC) in Milwaukee, joined us on the the trip. He was with us today and told us that his grandfather was killed by his Lithuanian neighbor. It was sad to hear the story.

We got in the bus and went to Paneriai Memorial. In this place 100,000 people were shot, over 70,000 were Jewish.  The natural setting of the memorial is so beautiful and calm. However, it feels lonely because the Germans and Soviet Union turned the beautiful natural place into one of the horrible and darkest places in history.  Now, there are only memorials. We saw the memorial to 70,000 Vilnius Jews who were murdered and burnt by the Nazis executioners and their accomplices. There was another memorial to 1,000 Jews from a small camp who were all killed in one day. There are also big pits which were used to burn bodies of the victims because the Germans wanted to cover up their crime.

Even though the Germans burnt the bodies of innocent people, they are still alive in my heart. Visiting these places helps me to keep the memory alive and to educate other people on what happened.