Because of that War: Film & Talk-Back 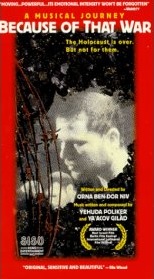 The first Israeli film to deal with the after effects of the Holocaust on the second generation in Israel, highlighting two well-known rock musicians (Yehuda Poliker & Ya’acov Gilad ) and their Holocaust survivor parents. Yehuda’s father was taken from Salonika to Treblinka, and Ya’acov’s mother from Warsaw to Auschwitz – and both parents give testimony. Includes performances of the musicians’ original songs throughout which reflect how the experiences of the parents affected their sons’ outlooks on life. In Hebrew with subtitles, 90 minutes, suitable for ages 15+.