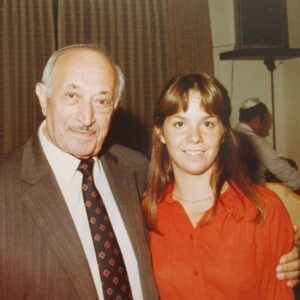 Simon Wiesenthal (1908-2005) devoted his life to bring Nazis and their collaborators to justice. Among other, he was involved in the search for Adolf Eichmann – the planner of the “Final Solution”, Franz Stangl – commander of the Sobibor and Treblinka extermination camps, Hermine Braunsteiner – “the Mare of Majdanek”, Josef Mengele – who was responsible for the selections at the Auschwitz concentration camp, as well as 1,100 other Nazis and collaborators.

After WW2, a trend developed to deny the Holocaust or parts of it. Nazis managed to escape to countries where they were not persecuted. Most survivors sought to rebuild their ruined lives and therefore focused on establishing new families in Israel and elsewhere.

There was one man, Simon Wiesenthal, known as the “Nazi hunter”, who did not forget the horrors of the Holocaust. He went way beyond the memory of his 89 murdered family members. He advocated for justice in the name of the six million Jews who were killed. To this end, he sent out on an international pursuit of the Nazis wherever they were hiding. He was involved in locating Eichmann in South America and provided the Israeli Mossad with valuable intelligence which enabled the kidnapping of Eichmann and bringing him to trial in Israel.

Dr. Racheli Kreisberg was born in the Netherlands in 1966 and immigrated to Israel in 1977 with her family. Dr. Kreisberg serves as Innovation Attaché at the Netherlands Embassy in Israel (www.idic.org.il) and is an experienced genealogist and tour guide in Israel. Dr. Kreisberg has been commemorating her grandfather Simon Wiesenthal since he died in 2005 https://simonwiesenthal-galicia-ai.com and develops the Simon Wiesenthal Genealogy Geolocation Initiative (SWIGGI). She holds a Ph.D. in Biotechnology and Molecular Microbiology from Tel Aviv University (TAU), an Executive MBA from TAU, a M.Sc. in Chemistry (summa cum laude) from the Technion. She served as an intelligence officer in the IDF.

This Zoom event is free and open to the public. You can register to receive a link to attend the presentation below.

Immediately following the presentation, there will be a virtual Q & A moderated by HERC’s Executive Director, Samantha Abramson.