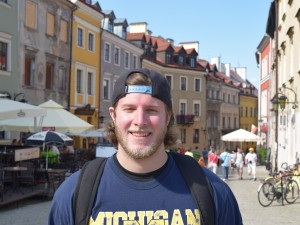 Dzień dobry! (Polish formal expression meaning “Good Afternoon”). My name is Tim Zaborowski and I am a senior at University of Wisconsin-Oshkosh and plan to graduate in the fall. I am a History major at UWO and throughout my time there I have taken multiple European History courses but never one that was specifically about the Holocaust. I’ve always had a particular interest in the Holocaust as it is arguably one of the most prominent events in history, so naturally I was intrigued at the opportunity to see these Holocaust related sites firsthand. Additionally, I am part Polish and the program offered me the ability to learn about and explore my Polish heritage in greater detail. Plus I was excited to travel to Europe for the first time!

Today was our first day in Lublin after being in Krakow the previous five. After arriving in Lublin in the afternoon, we were given a guided tour of the Lublin Castle which was originally built in the 13th Century. Inside the castle walls, we toured the Lublin museum and gazed upon the inside of the Holy Trinity Chapel.  The Holy Trinity Chapel is one of the finest examples of Medieval art in Poland. Its Gothic architecture, combined with Russian-Byzantine polychromes, makes up a unique synthesis of Eastern and Western cultures. From the 17th-19th Centuries, the Chapel was considerably damaged and eventually covered by plaster by the Russians. However, in 1897 they were rediscovered and restored as best as possible. After gazing upon the beauty of the Chapel, we toured the tower inside the Lublin Castle. Interestingly, the tower and the castle chapel were the only buildings that had survived the destruction of the castle during wars in the 17th century. One possible explanation for this could be because the brick walls of the tower are 4m thick. Also, the tower, along with the castle, served as a prison for the nobility. Overall, the first day in Lublin was one I will never forget due the beauty of the paintings and the view of the city from the top of the tower!  View the trip’s photo album here.