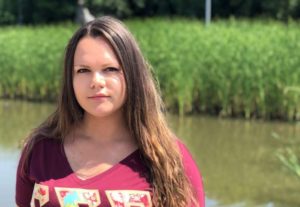 My name is Laura Markley and I am a Secondary Education major in Broadfield Social Science with a minor in history. My experience here will be incredibly beneficial for my future classroom and students by being able to provide a first-hand account of the sites of the Holocaust in Poland and Lithuania.

Our journey for today was to visit the city of Łódź and all that it entails in relation to the Holocaust. Being that today was the religious holiday, Corpus Christi, everything except some restaurants and gas stations were closed. We were not able to stop at any museums in Łódź, but visited the open sites that we could see. Upon our arrival in Łódź, we went straight to the Jewish cemetery. The Jewish cemetery is over 120 years old with the first grave being established in 1892. It is also one of the largest Jewish cemeteries with over 180,000 tombs or graves. We ventured into the funeral house where bodies were prepared before burial. The building itself was large with a main area in which the family members would be able to say their final goodbyes and two preparation rooms on each side, one for the women and one for the men. We were able to go into the male preparation room. A single table lay in the room along with a washing device. The funeral building was provided by the Dobrzynkick family.

From here, we made our way towards the cemetery. Before we entered the gate, we stopped at a memorial just to the right of the entrance. The memorial was dedicated to all of the innocent Jewish men, women and children whose lives were taken so abruptly by the Nazis from 1939 to 1945. My heart goes out to all of those who suffered. We made our way through the gate and into the cemetery. Beautiful tombs and graves were placed throughout the grounds. It is hard to say that something so devastating was beautiful, but it is a way to show respect to those we have lost. Our tour guide, Tomasc, took us to some of the graves of the wealthy textile owners from Łódź. The Poznanski textile company was the largest in Łódź, employing some 25,000 workers. The family built a beautiful, enormous “palace” as Tomasc called it, in which the owner Izrael and his wife had their tombs. Part of the Jewish tradition is to be buried under the ground, not above in a tomb. While walking through the cemetery, I couldn’t help but think how untidy the grounds were kept. Weeds and plants were growing all around, some three feet high. As I was thinking that, Tomasc shared that oftentimes families will not tend to the graves because it is believed that once they are buried, they are under the care of God. When hearing that, I felt comforted. It is not simply lowering the body into the grave, but providing a place of solitude in which they will be united with God. We stopped at the site of the “Pole Gettowe,” the ghetto field. Łódź was the location of a large Jewish ghetto during World War II. Thousands upon thousands of people died there, as many as 100 people per day. As part of the Jewish religion, those who pass on must be buried that same day. With the number of innocent people dying each day, proper graves were not made. Instead, they created nearly identical graves for those who passed in quick numbers. The ghetto field holds 43,527 ghetto victims during the years of 1940-1944. Many were executed or brutally slain, while others died from disease or starvation. It was a tragic sight to see, knowing how many people had suffered in this ghetto. Our group began back towards the entrance to make way for the next stop. At the gate was a group of Jewish people from Israel who were all singing. It was rather impactful to see them there to honor and respect the members of their faith. Tomasc said that many Jewish residents of Israel have family or relatives who are buried in this cemetery. I cannot imagine how powerful it must be for a member of the Jewish faith to see first-hand these sites and to have possibly had relations to those who perished in this devastating time in history.

After leaving the cemetery, our next stop was the Radegast train station in Łódź. From this train station, people in the ghetto were sent to the extermination camps. Over 145,000 people from the ghetto were sent to different extermination camps. Above the entryway at the memorial says “Thou shall not kill,” a sad, but powerful reminder. We walked to the physical station in which several railcars were on display. One of the railcars had a warning sign displayed on it saying “For safety reasons, no more than a maximum of 20 persons in the car.” It was rather ironic to display that to people because, as Tomasc said “the Germans would fill these cars with 70-100 people.” How? How is it possible that 70-100 people could fit in this tiny railcar and we were getting cramped with 17 people? I think that that was the point of the sign. To show to us the severity and extreme conditions that people from the ghetto endured to their unforeseen deaths. While all of us were standing next to the cars on the platform, our tour leader Tomasc shared a personal and dark story with us:

“After the Warsaw Uprising, my family and I were sent [from Warsaw after the uprising] to different parts of Poland in a railcar similar to this. Out of my family of eleven, only three of us made it. We were not Jewish. We rode on the train for two and a half days to all over and we got to a tunnel were the railcar stopped. The car began to fill with smoke fumes that had carbon monoxide in them…This happened for four to six minutes and then it stopped. All to scare us…”

I was silent, we all were. I did not know what to say or how to react. We had been with Tomasc for three days already, and none of us knew that he had endured part of this devastating time. Someone had asked Tomasc how old he was when this happened. His response was “I do not remember… I know that I am older than 50 but feel as if I am 40,” a slight chuckle as he said the last part of his comment. Again, we were shocked. But then I thought, maybe this is a way to repress the memories or, maybe he does not know his actual age. Given the time period, it is not unlikely. I was standing not three feet away from someone who was physically there in the railcar, someone who had lost members of his family due to terrible people. You cannot prepare yourself for something like that. The sites and museums are all powerful and impactful, but to hear the first-hand account of someone who was not Jewish, but still experienced similar events is indescribable.

The rest of our morning was spent visiting memorial sites like the Polish Children’s Camp Memorial and the Righteous among the Nations Memorial. There are not enough words to describe the feeling you get when you see these kinds of places.  We made our last trip to the main walking street, Piotrkowska where we walked around and stopped to eat Jewish/Polish cuisine. While a lighter day in terms of sites or museums seen, it was a heavy day with stories and facts about those who were part of this terrible time in history. My heart again goes out to all those who were involved in this event.