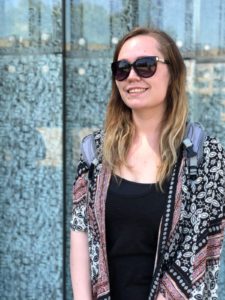 My name is Marjorie Peterson and I attend the University of Wisconsin Oshkosh. I am pursuing a double major in Psychology and Criminal Justice, with a minor in Sociology. I was very excited to attend this trip to learn more about the Holocaust and to be able to bring my knowledge acquired abroad home with me. Further, I want to educate others on the history of Jews as well as the actions and aftermath of the Holocaust.

Today, we departed Lublin at 8 A.M. for a three hour bus ride to Warsaw. After dropping our luggage off at the hotel, we set foot to the Polin Museum which is located inside the former Ghetto established by the Germans during World War II. This museum is dedicated to the History of the Polish Jews. Before we walked into the museum, our tour guide told us a little bit about the architecture of the museum. The outside is created in a wave format, representing waves of the Red Sea. Stepping into the museum, the ceiling is laid out in a way to depict the gaps in the 1,000 year history of the Polish Jews. After grabbing a bite to eat in the cafe, we walked through the museum in small groups. Throughout the museum, 1,000 years of Polish Jewish History is shown in different exhibits which can be lead by a tour guide or by carrying around a portable speaker with different number sets for each exhibit. This was a very educational experience, with interactive exhibits, photographs, auditory descriptions as well as writings throughout the museum.

Next, we took a look at the Monument of Ghetto Heroes, or Monument of Martyrs, which is situated right in front of the Polin Museum. This monument symbolizes the heroes of the ghetto who fought for dignity and humanity in a battle they knew they couldn’t win. Stones are laid on the monument, a Jewish tradition, to represent protection of the corpses and that they must not be damaged.

After learning more about the Monument of Ghetto Heroes, we walked down Memory Line which starts at the Polin Museum. Walking throughout some parts of Warsaw, you see memorial stones written in Polish and Hebrew to remember martyrs of the Holocaust. During one of the stops, a stone was dedicated to Szmul Zygielbojm who committed suicide to try to get the attention of the allied powers. While in London, he wrote Parliament a letter about the desecration of Jews in Poland. Behind this dedication stone, there is a mural symbolizing people burning in fire. White lines are shown to symbolize flames. A quote by Szmul Zygielbojm expresses his alliance with the victims of the Holocaust, “I can not be silent and can not live when the remnants of the Jewish people die in Poland, of which I am a representative”.

Lastly, we visited the old Warsaw train station, where Jews boarded the trains to the Nazi extermination camps from 1942-1943. This is now a memorial to commemorate the victims, and is carved with all the first names of the lives lost in the camp from the old station.

Throughout the day it was made shown that multiple individuals made a tremendous impact for the history of Warsaw in their efforts to bring light to the kind of brutality Jewish citizens were enduring. Overall, I was very happy to have visited these sites today because of the amount of education it provided on the Holocaust and the victims. I am excited to learn more about the history of Warsaw throughout the next couple of days!