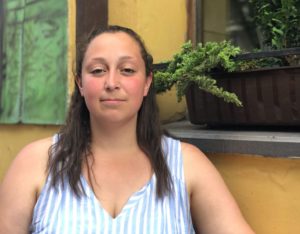 Today we started off by going to Oskar Schindler’s Factory, made famous by the movie Schindler’s List. It has been made into an interactive museum profiling the experience of Jewish families at the time of the Holocaust. The experience of walking through the museum was nothing short of amazing. The creators of the museum clearly put a lot of thought into its presentation They produced it in a way that allows you to experience and understand the depth of the tragedy of the Holocaust.

Next we went to Auschwitz I. Auschwitz is probably the most well-known Nazi death camp, just outside of Krakow. It was divided into two pieces. Auschwitz I was an old army base that became a concentration camp. Auschwitz-Berkinau was a death camp. Upon arriving we were greeted by our wonderful tour guide. First, she gave us an overview of the layout. Then we walked through the barrack. Each one had a different theme. One of them focused on the physical evidence, such as hair, shoes, and clothes. I was especially moved by the exhibit that had pounds and pounds of hair that was cut off of the Jew’s heads. It was so much hair and it belonged to someone before it was cut off. It was overwhelming to see the shoes, pots and pans, brushes, and children’s clothes. It helped to really demonstrate that each person who died there had a name, a family, a home, and a story. Another barrack that displayed all of the ways individuals were punished within the camp. Examples include starvation, lack of oxygen, and isolation. The last thing we did at Auschwitz I was walk through the gas chamber and crematorium. This by far was the hardest part to handle emotionally. Learning and talking about the gas chambers is hard, but to walk through and run your hand across the wall where innocent people scratched to try to get out, is a totally different experience. After walking through that, we all felt emotional, and it was difficult to process.

After Auschwitz I, we went to Auschwitz-Birkenau. I was surprised by how large it was, and how much of it was destroyed. One thing that I found disturbing is the vandalism that has taken place in one of the barracks that was available to the public. People have etched their names and other terms on the bricks that it is made up of. It is important to remember that even though it looks like an empty building now, at one point it is where scared, innocent people had to stay. Overall, I am grateful to be able to see both Auschwitz locations. It is important to remember that “those who do not remember the past are doomed to repeat it.”