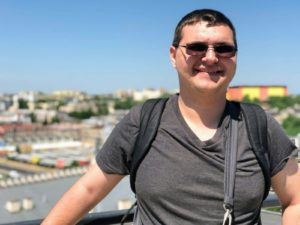 On our third day in Lublin, we left later than usual and arrived at a former yeshiva that is now transformed into a hotel. According to Magda, our guide, this building was built relatively recently in the 1930s. What was particularly interesting about the history of the synagogue was that it was built for the Hasidic Jews, one of the many sects of Judaism. What makes Hasidic Judaism different is that they believe in the need for joy in worship; that they believe that in order to get closer to God, they will dance and sing during their prayers. The yeshiva sadly had a short life because during the German occupation of Poland starting in 1939, the yeshiva was transformed into an office and hospital facility for the Germans. Only the balcony of the building inside the synagogue main worship room remains. Today the synagogue is no longer in continuous use because there are not enough Jews left in Lublin to maintain the synagogue.

This seemed to have been the particular theme for our day: Jewish life in Lublin has been radically transformed as the result of the Nazi occupation and the near destruction of Poland’s Jews. In addition to the synagogue we visited in the morning, we were shown the old Lublin Jewish cemetery which dates back to the 16th century. It is the oldest Jewish cemetery in Lublin. Once again, Magda explained to us that this is was another consequence of the Holocaust in Lublin. I am reminded of what was said the other day: the Holocaust wasn’t some far off event that affected people far away, the Holocaust could be felt by all Jews living in Poland under Nazi occupation. There are not a lot of Jewish tombstones left at the old cemetery because the Nazis had looted the cemetery and used the old tombstones as parts of the road at Majdanek concentration camp. We could see bullet holes and desecrated Jewish tombstones all over the cemetery. The grave desecration in my view was another aspect of the Holocaust that was one of the many horrific aspects of the genocide. It was not enough to kill Jews, the tormentors had to destroy every aspect of Jewish life. We learned today that there were over 100 synagogues and around one-third of Lublin was Jewish. Today, there are very few Jews left in the city. Almost all Jews in Lublin were deported to Belzec and other extermination centers. Today there are very few aspects of Jewish life left.

There is at least a glimmer of hope for Lublin, as we learned that at least one Jewish synagogue was spared from the war and Nazi occupation. We were shown a private Jewish synagogue where an elderly Jewish woman gave us a tour.  It was not destroyed by the Nazis and remained in its original form. That fact alone made me feel hopeful for the future of the Jewish community in Poland, but also sad for the Jews of Lublin. Jewish life in Lublin has almost practically gone. I could feel the stark difference between Krakow and Lublin’s experience based on how the war went for both cities. Krakow was largely spared but Lublin endured an enormous amount of destruction and it is evident because of the Soviet era apartments that dot the city. I was glad to hear that Hasidic Jews from around the world, from Israel, the United States, and Brazil still gather there for numerous religious events. It is still a place of prayer. That fact alone has given me hope that perhaps one day, there could be a renaissance for Jews in Lublin and slowly but surely Jewish life could return one day. However, I felt an emptiness and an abandoned feeling throughout the day. The scars of the Holocaust are never truly forgotten because even if the genocide is over, the life of society is no longer the same.