“Earth, do not cover my blood; let there be no resting place for my outcry!” 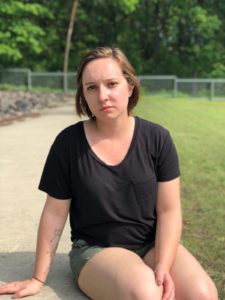 My name is Alexandria Oemig.  I am a student at UW Oshkosh and am majoring in Psychology. This trip has already been full of such powerful and memorable moments, but today will be a day I won’t soon forget.

We began our day with a bus ride towards the Majdanek camp. On the way, we stopped at a former railway station that served as a deportation point. Approximately 29,000 Jews were deported from the Lublin area to the Belzec death camp. Today, the station is no longer in use, and in its place is a lovely memorial. It was striking how close to the main road it was. It makes sense, because it was a major railway station, but it still surprises me how the atrocities happened out in the open. The camps themselves were a bit further out of the way, but still fairly close to town, too.

We got back in the bus and continued on to Majdanek. While Majdanek wasn’t exclusively an extermination center, it was one of the most lethal concentration camps. It is also one of the camps that is the best preserved. We walked through the gas chambers, stained with blue from oxidized Zyklon B. We passed the barracks and looked at the exhibitions. Toward the end, we went through the crematorium, which was particularly moving. The sterility and cold efficiency was evident and poignant. After seeing the ovens, we walked up to the memorial monument. I didn’t really know what to expect, other than a mention of ashes under the dome. Walking up the steps and seeing the pile of ash (mixed with soil) took my breath away. It was terrible and moving and horrifying. The idea of thousands upon thousands of people having their lives erased, reduced to nothing but ash, is truly heartbreaking.

We had some time to decompress on the bus ride to the Belzec memorial, which was good, because Belzec was even more overwhelming and powerful than I could have imagined. Belzec was an extermination center. Over 500,000 people came through its gates. Two are known to have survived. Two. When the Nazis left Belzec, they completely demolished everything; leveled it to the ground and built a farm on top of it. Now, instead of it being completely erased from memory, an incredible memorial stands on the site. It’s hard to describe it exactly, but every artistic aspect of the memorial was intentional and well thought out. We walked into the memorial, to the Wailing Wall portion, and up and around to the museum section. There was a very engaging exhibition with many multimedia exhibits. But the most powerful part was the Contemplation Room. It was a concrete room the size of one of the gas chambers with only two dim lights. It was cold and dark. Absolutely haunting. I walked the length of the room and back towards the door. On my way out, it occurred to me: I get to leave. I get to walk out of this awful place. So many people did not.

Throughout the Belzec memorial, a verse from the book of Job (16:18) was featured. It spoke to me as a plea from the victims: “Earth, do not cover my blood; let there be no resting place for my outcry!” We cannot cover over the atrocities of the Holocaust, we cannot bury their cries for justice, and we must heed their warnings so it never happens again.