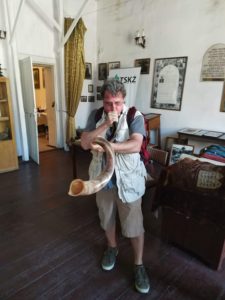 Today, we are near the end of our journey through Poland and Lithuania. We have visited many of the death camps, like Auschwitz, Belzec, and Majdanek. We have seen the evidence of unspeakable crimes toward Jews. But today is a little different. We leave our hotel in Vilnius on foot and make our way to the first destination of this day, the Choral synagogue. The Choral synagogue was one of over 100 synagogues that existed in Vilnius before the war, but today this is the only active one. This has been the same story in every city we have visited. There were only two active synagogues in Krakow, one in Warsaw and none in Lublin.

After being let through the security gate and having the men put on kippahs, we were welcomed into the synagogue by the rabbi. When I asked the rabbi if they have a minyan, he proudly said “yes we have a minyan!” This was not the case in other synagogues we visited, where there is a struggle to find enough people to have a time of prayer.

We went up into the gallery and viewed photographs of wooden synagogues from the countryside of Lithuania that survived the war. Almost all of them were boarded up and in very bad shape. Most of the wooden synagogue buildings were destroyed by the Germans or Soviets.  The Choral synagogue is truly one of the most beautiful I have ever seen. The architecture of the building is unique, with galleries surrounding the interior space.

After our brief stop at the Choral synagogue, we continued our walking tour of the old town of Vilnius.  Deep inside the Jewish ghetto, We stopped at the house of Jacob Gens, the leader of the Ghetto, and heard more horrific stories of the Holocaust.  In Lithuania, Jews were taken by truck outside the city into the woods and shot. The Germans and their Lithuanian accomplices murdered over 95% of the Jews of Lithuania in this manner.

We continued our old town walk past many beautiful churches and public buildings until we came to the location of the greatest synagogue of Vilnius. Miraculously, this great synagogue survived the war.  It was destroyed in the second Holocaust when the Soviets tried to stamp out all religion. Now, an ugly kindergarten building sits on that site.  Off to the side stands a sculpture of one of the greatest sages of the Talmud, the Vilna Gaon.

The great synagogue of Vilnius is gone, but we have seen many synagogue buildings survive the war to be closed up or turned into museums.  They are now being used as in a variety of ways, such as an Orthodox Church, a tea shop, or even a beer bar and restaurant where the original paintings with writing in Hebrew are on the walls. All of these bear witness to Jewish life before the war. The people who went there to pray and to study the Torah are gone, but you can feel the energy from these old synagogues. I wish I had more time to try and learn the stories behind them.

At the end of the day, we met with Simon Gurevich, the head of the Jewish community in Vilnius. He told us about Jewish life today in Vilnius.  He talked about how younger people seem to have a growing interest in Judaism, but he also described the struggles in the second Holocaust with Soviet persecution. In a country that once had over 200,000 Jews, only 5,000 remain and around 3,000 live in Vilnius, once known as the Jerusalem of Lithuania. I am hopeful for Jewish life in Vilnius. I am hopeful after the horrific crimes of the past that these synagogue buildings will once again be needed.