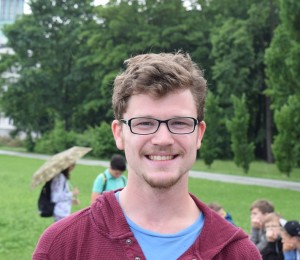 Hello from Warsaw, Poland! My name is Andrew C. Smith and I am a recent graduate from the University of Wisconsin-Oshkosh where I earned a degree in History.  Growing up, I have been surrounded by Polish influence. I lived in a town called Sobieski and went to school in the neighboring district of Pulaski (which annually hosts one of the nation’s largest polka festivals: Polka Days). I decided to take this trip because of my Polish background, but also because I have always been intrigued by the Holocaust.

This morning we left our previous hostel in Lublin and boarded a train to Warsaw. The train ride to Warsaw was a great opportunity for us to see the countryside of Poland; which looked a lot like the landscape of Wisconsin .When we reached our destination, we met our new tour guide, Thomas. Right away, Thomas connected with our group. Born in Warsaw in 1930, Thomas and his parents were the only three out of an eleven-person family to survive World War II. He loves this city and it was evident through his words as we began our tour. We first explored Warsaw’s Old Town. One of our first stops was at the Holy Cross Church. This church was not only significant to the city of Warsaw, but for Thomas too. Inside the church is the resting spot to famous Polish pianist, Frederick Chopin. And to Thomas, this is where his parents got married and he got baptized. Throughout the city there are benches dedicated to Chopin and when a button is clicked, music is played.

From here we walked to the Saxonian King’s Square. Established in the 1700s, this Square of great size and consisted of many arches and columns. However, after World War II, only three arches remain. Having defeated the Russian army, the Square was renamed to Pilsudski Square after military leader Jozef Pilsudski. Today under the remaining arches is an eternal flame guarded by Polish soldiers. The eternal flame is in memory of all those who have died fighting for Poland.

We continued into Warsaw’s New Town. Here we saw a church that served as a hospital during the German bombings. Nuns raised a Red Cross flag above the church and provided shelter and aid for those that needed it. Unfortunately, the Germans eventually bombed the church killing many inside. Throughout the New Town, and parts of the Old Town, there were statues of bears. Thomas explained that these bears were brown bears and they represent protection. The weather was very inconsistent today and we experienced a small patch of rain. As the rain dropped down, the streets became vacant. We took shelter in a church and waited for the clouds to pass. View the trip’s photo album here.