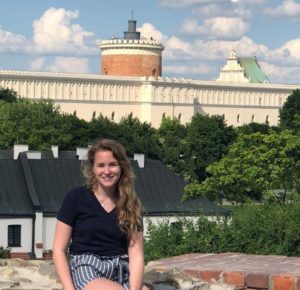 Today we had to wake up early and get on a bus to Lublin. After being out enjoying the nightlife and getting an early morning snack from KFC, many of us were tired from the late night. After settling in on the bus with all of our belongings, many people drifted off to sleep on our drive through the countryside. For those that stayed awake, our guide tried teaching us some simple but important Polish phrases which we all butchered. About halfway through our drive, we stopped to see the memorial in Tarnow. The memorial, named Zbylitowska Góra, represents the mass murder that occurred in 1941. During this mass murder, the Nazis marched Jews and Poles out into the woods where adults were shot and children had theirs heads bashed in with the butt of their guns to save bullets. The memorial is a giant monument acknowledging the tragedy that occurred on that day. Behind the monument is a path through the woods with sections marked off by fences where they believe the different mass graves are located in that small area. After spending some time at the memorial letting yet another of the atrocities from the Holocaust sink in, we got back on the bus and continued our drive. After sitting on the bus and reflecting on what I had saw in Tarnow, I still have no words to describe my feelings about the mass murder. I cannot understand why or how so many people were able and willing to carry out these acts on people who are really no different than anyone else.

When we finally got to Lublin, we dropped our bags off at the hotel and continued on into the city where we met our tour guide at the Grodzka Gate. The gate separates the Christian, Old Town section of Lublin from the Jewish section where the Polish King Casimir III, had granted them permission to settle around the Lublin Castle. Before World War II, there was a large population of Jews living in the area around the castle with a large synagogue that could hold over 3,000 men at a time. During and after the war, most of the area including the synagogue was destroyed. Grodzka Gate housed a theater for many years and is now a museum and archive detailing the history of the Jewish section of the town and all the people who lived there. After leaving the gate, we went to Lublin Castle. The castle has been rebuilt multiple times and was even used as a prison in the 19th Century. Within the castle is the royal chapel that contained both Catholic and Orthodox frescoes. The chapel was supposed to be Catholic but had a few Orthodox frescoes and other elements. It was very interesting to see the mix of these two different parts of Christianity. One interesting thing our guide pointed out is that some of the scratched writing on the walls was actually 17th century graffiti. While many things have changed since then, one thing that hasn’t is that people will still carve their names into things they probably shouldn’t. We left the castle and went to the old town for lunch. While walking around we found a building that had a new level added every century starting in the 14th century and was finally completed in 1954. After the experience I’ve had today I’m excited to see what the next few days in Lublin has in store for myself and the entire group!