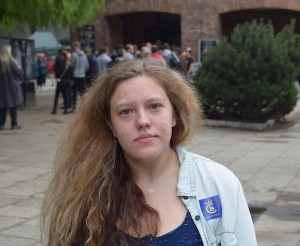 My name is Trinity Elmer. I just finished my junior year at UW-Oshkosh and am so excited to be able to be on this trip. My majors are political science, history, and religious studies, and having taken classes on The Holocaust and Judaism in general, it is amazing to be here to actually witness and experience the places where so many important events took place. It’s a whole new level of learning. Today we visited Auschwitz-Birkenau. There were so many emotional parts, but there were a few that stood out in particular. In the first part of the camp tour, seeing the huge numbers of items that were left behind from the victims and seeing the real pictures of those who had been through Auschwitz while being in the very places that they stood, was overwhelming. The prison portion, especially Father Kolbe’s cell where flowers were left was equally disturbing. Of course entering the hallway where the pictures of prisoners lined the walls and seeing their occupations and death dates as well as stepping into the gas chamber were also huge moments. In the Birkenau portion, the enormity was shocking to me. The openness of the land around us was somehow so stifling when I saw the fences and guard towers. The worst part though, was being in the barrack known as the Death Block where women waited to be sent to the gas chambers.  Here women were crammed into tiny beds in misery and waiting for their last moments. This was the most surreal and sobering experiences I have ever had. Just learning about the experience is not remotely equivalent to the emotions and connection I felt with the victims in that moment.  View the trip’s photo album here.