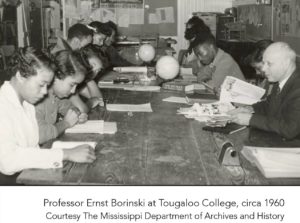 Based on a book by the late author Gabrielle Simon Edgecomb, From Swastika to Jim Crow, tells the little-known story of Jewish refugee scholars who escaped Nazi persecution by fleeing to America, and when faced with anti-Semitic sentiment at mainstream American universities, were hired for positions at historically black colleges and universities in the then-segregated South.

The film will be introduced by Joyce Mallory, Organization Development Consultant for the Nonprofit Center of Milwaukee and a graduate of Tougaloo College in Mississippi. Mallory will discuss her experiences with Sociology Professor Ernst Borinski, a German-Jewish sociologist and intellectual who immigrated to the United States from Germany in 1938 and contributed to undermining Jim Crow laws in Mississippi in the 1950s and 1960s. To conclude the program, Fran Kaplan, recently retired Director of America’s Black Holocaust Museum, will facilitate a talk-back session.