(Community Program) The Light of Days: The Untold Story of Women Resistance Fighters in Hitler’s Ghettos 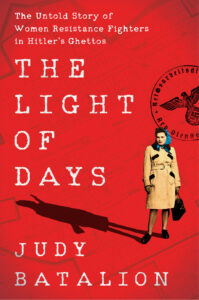 On Sunday, March 6, 2022, at 1:30pm at Congregation Shalom, New York Times Bestselling author Judy Batalion will be interviewed by Dr. Rachel Baum at a community event sharing her newly published book, “The Light of Days: The Untold Story of Women Resistance Fighters in Hitler’s Ghettos.”  This book tells the remarkable story, largely forgotten until now, of the young Jewish women who became resistance fighters against the Nazis during World War II.  It has already been optioned by Steven Spielberg for a major motion picture.  “These were women who acted with ferocity and fortitude – even violently- smuggling, gathering intelligence, committing sabotage, and engaging in combat; they were proud of their fire,” says author Judy Batalion. This deeply researched book includes extraordinary accounts of the strong Jewish women who fought back against the seemingly unstoppable Nazi regime, never before chronicled in full. It follows the women through arrests, internment, and for a lucky few, into the late 20th century and beyond.

Registrants have the option to attend virtually through a streaming link or in person at Congregation Shalom. SPACE IS LIMITED for the in-person event! 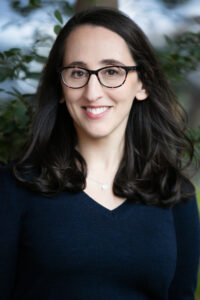 This program is in partnership with the Nathan and Esther Pelz Holocaust Education Resource Center and Congregation Shalom.

THIS PROGRAM IS GENEROUSLY SPONSORED BY:

Purchase the book locally from our local partner Boswell Book Company. Boswell Books will also be selling the book at the event on March 6.

**MJF disclaimer:
We ask that all eligible adults who wish to attend in-person are current on relevant COVID-19 vaccinations, which includes receiving booster shots when eligible.