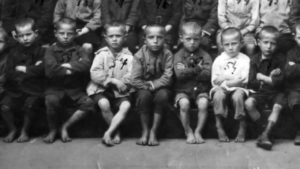 A story of Jewish faith, family, and a tragedy that reverberated for generations.

The pogroms in the years following the Russian Revolution of 1917 killed tens of thousands of Jews and marked the beginning of the near-obliteration of Jewish life from an area of the world to which nearly 80% of the world’s Jewry can trace its roots.  Feiga Shamis, a Jewish mother of 12, wrote about those years in a rare first-hand account.  What happened drove her to make a choice no mother should ever have to make.  But it was a choice that ensured the survival of two of her children.

Decades later, Feiga’s granddaughter, Judy Favish, set out from South Africa for Poland and Ukraine to try to understand the grandmother she never met, the choice Feiga made, and her father who would never talk about his past. Talk-back led by Dr. Amy Shapiro.