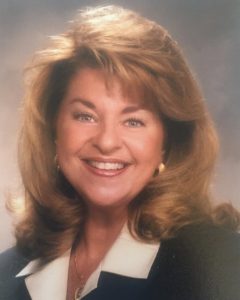 Fall is just around the corner and here, at the Nathan and Esther Pelz Holocaust Education Resource Center (HERC), we are eager to embark on a new educational journey!  When reflecting upon the accomplishments made by our passionate Holocaust survivor speakers, our dedicated volunteers, visionary leaders, and outstanding staff, I beam with pride.  However, at the same time, I realize that there is much work to be done in the community before racism, bullying, anti-Semitism, and bigotry are finally eradicated.  In the academic year of 2015-2016 HERC increased its outreach by 17%, engaging over 21,000 people across the state of Wisconsin.  We are grateful to the teachers, students, and adults who participated in our programs, each of which are designed to draw lessons from the Holocaust and apply them to our current reality and daily challenges.  No less important, I truly appreciate and am thankful for all those individuals and foundations that have recognized our hard work and continue to provide us with generous support, without which our compelling message could not be translated into dozens of class visits, lectures, films, field trips, and more.

In the fall of 2016, HERC will be launching new programs while at the same time maintaining and updating its past successful ones.  Our newly structured and increasingly diverse Board, recently added standing committees, strategic planning, and ongoing fundraising efforts are all geared to heighten this organization to the next level.  This will be accomplished as HERC launches the following programs and many more:

1. RID (Respect for Individual Differences): A new program teaching tolerance at a number of Milwaukee public middle & high schools through the MPS system

2. Special programs designed for Catholic middle schools in the Milwaukee Archdiocese and beyond

3. DiverCity: An annual program for college students which offers a visit to HERC’s new memorial and educational space Pinat Hatikvah (A Corner of Hope), followed by a tour of different ethnic and religious communities in Milwaukee

4. Holocaust by Bullets: An exhibit exploring the work of Father Patrick Desbois to locate and study Holocaust sites in Eastern Europe, a partnership with the Milwaukee Jewish Federation and the Jewish Museum Milwaukee

As Chair of HERC, I salute all of those who choose to join HERC’s growing extended family.  Each of you has played an imperative role in this organization’s continued growth.  I invite all of you to share both our mission and legacies with your friends, colleagues, and family members and continue to take part in our never-ending, inspiring work.

From the Executive Director 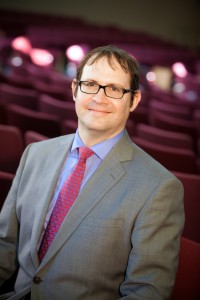 Like many other Holocaust museums and educational organizations around the world, we at HERC have been coping with the loss of several beloved Holocaust survivors, who did on a local level what Elie Wiesel, of blessed memory, has accomplished on a global scale to raise awareness of the Holocaust.  Similarly to our counterparts in other cities around the world, we all need to address the question: “What is the future of the past?”  This oxymoronic questions may sound perplexing.  Yet we understand that the past at stake is the memory of the genocide of six million Jews and several million more non-Jews by the Nazis and their collaborators.  We must find new and creative ways to make sure that the memory of the Holocaust and, no less important, a better understanding of the sequence of events that led to it, will continue to press the minds of our new generation and those of the future.  The days when the memory of the Holocaust could be sustained by those who have witnessed the Nazi devil in their own eyes are becoming fewer and fewer.  At HERC, we have become key players in this global attempt to provide an answer to the question posed above.  Our training workshop for the children of survivors that took place in early August; our growing team of volunteer Educators, our staff which includes a new Director of Education & Engagement Brittany Hager McNeely, and, lastly, our broad array of lectures, films, and school programs are all meant to keep alive the memory of the Holocaust and the lessons humankind must draw from it.  In troubling, tumultuous times when anti-Semitism is on the rise across Europe, when violence, genocide, and ethnic as well as religious violence takes the lives of thousands of people around the world, we realize how crucial it is to continue to engage young Milwaukeeans and Wisconsinites in Holocaust education.  In doing so, we fulfill Wiesel’s vow never to “…forget these things, even where I condemned to live as long as God Himself.” 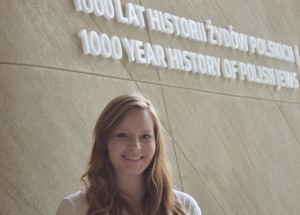 On May 2nd – June 4th, Dr. Shay Pilnik led a group of 14 college students from the UW-Milwaukee, Madison, and Oshkosh campuses on a study abroad trip to Poland & Lithuania.  This six credit course entitled “Twentieth Century Eastern Europe & the Holocaust” was led by Dr. Pilnik & Dr. Karl Loewenstein from the history department at UW-Oshkosh.  The trip and course were designed to help students place the destruction of European Jewry during World War II against the broad background of Polish and Lithuanian history, Eastern European Jewish history, the history of anti-Semitism, and the history of the Cold War.  Among the many sites the students visited were: the labor and death camps at Auschwitz & Majdanek, the memorial at the death camp in Belzec, the remains of the Warsaw Ghetto, the city of Krakow with its Jewish district Kazimierz, and the killing field of Ponary, lying on the outskirts of Lithuania’s capital Vilnius.  Each of the participating students on the trip received a HERC scholarship to defray some of the travel cost, a generous gift from an anonymous donor facilitated through the Jewish Community Foundation.  In her thank you note to HERC and the donor, undergraduate student Rachel Bogatay wrote: “This experience will stay with me for as long as I live and I hope that I can share it with as many people as possible.  I cannot express what this trip meant to me…”  You may read the daily blog posts from the trip here. 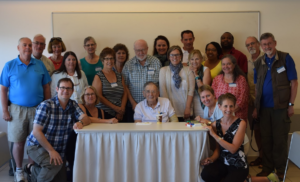 During the second part of June, HERC led another overseas trip with a group of 21 teachers and lay leaders to Israel, including a seminar at Yad Vashem.  This is the second time the trip has occurred, constituting part II of a Holocaust course, called “Holocaust Study Institute” offered locally during the winter and spring, and co-sponsored by HERC and the Lux Center for Jewish Studies at Sacred Heart Seminary & School of Theology.  Led by Dr. Shay Pilnik & Dr. Richard Lux, founding director of the Lux Center, the trip provided the participants with an extraordinary learning experience, as it weaved together a visit to Holy Land sites with the study of the country’s modern history.  Presented through these lenses as they visited archaeological sites, the Shalom Hartman Institute, the Museum of the Jewish People (Beith Hatfutsot), and took a three day seminar at Yad Vashem, the trip helped the group appreciate the link between the Jewish people, its ancestral land, the tragic history of anti-Semitism leading to the Holocaust, and the birth of the modern state of Israel.  The educators who took part in the trip received scholarships that defrayed some of the travel cost, made available through a generous grant from the Conference on Jewish Material Claims against Germany (the Claims Conference). 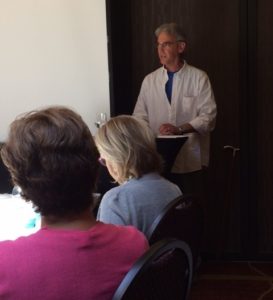 We wish to thank all those who participated in HERC’s first workshop for children of Holocaust survivors. Convened by our Speakers Bureau chair Arleen Peltz on August 2nd, the workshop was led by our long-time educator Mary Munson Murphy, who did a wonderful job stirring our growing number of children of survivors, otherwise known as the 2Gs, to think about themselves as a group sharing common upbringing, as bearers of the memory of their parents, and lastly – as the “torch carriers” of Holocaust memory, looking into the next decades of the 21 century.  The short presentations by Arleen and two recent additions to our Speakers Bureau, Nancy Kennedy Barnett and Jeffrey Gingold, endowed the workshop with a touching, personal feel that left all partakers in the workshop asking when the next session of the workshop will be held (more information on that is soon to follow).

Anti-Judaism: Past & Present, A Lecture by Dr. David Nirenberg 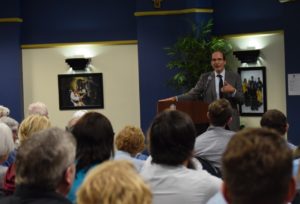 On Tuesday, September 6th, HERC hosted Dr. David Nirenberg, the Deborah R. & Edgar D. Jannotta Professor of Medieval History and Committee on Social Thought at the University of Chicago.  Dr. Nirenberg, who has a particular interest in Christian, Jewish, and Muslim thought in Medieval Europe, spoke on the topic of anti-Judaism, past and present.  His talk, suggesting that non-Jews have been defining their own identity by referring to the Jews and Judaism, sometimes without much contact with actual Jews, from ancient Egypt though the rise of ISIS, was thought-provoking and in insightful. Close to 150 people attended the lecture, among them student, faculty and community members.  We thank our partners of this program: Catholic Financial Life, Department of Theology at Marquette University, Hillel Milwaukee, Jewish Community Relations Council of the Milwaukee Jewish Federation, Marquette University Jewish Student Union, and the Marquette University Student Government.