Reflections of our Trip 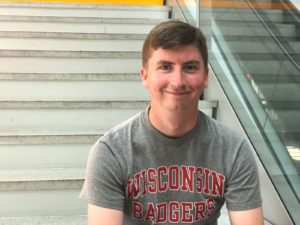 My name is William Reardon and I am a student at UW Oshkosh, majoring in history.  Yesterday, we were supposed to be in Vilnius around early afternoon, but our flight was cancelled. We could not get on another one until the next day, so we decided to take a bus instead. We found a very nice express bus that took about 7 hours to make the trip. We arrived in Vilnius around midnight, so I want to write about a few of the trip’s highlights.

Our group arrived in Krakow on the 21st of May and met our city tour guide Lukas and Jacek who was our tour guide for the duration of our stay in Poland.   We viewed our first concentration camp that later became a death camp, Auschwitz I and Auschwitz II Birkenau. This was the first time that we were actually faced with a true meaning and location of the Holocaust. Everyone’s emotions were seen that day, and it was tough to hold mine back.  It is a place meant for that sorrow and grief, with the murder and abuse that was carried out there.

The second part of the trip through Poland started in Lublin. During our five-hour ride to Lublin, we stopped at site where thousands were murdered outside of Tarnow. As it was pointed out to us, the day we stopped and visited the cemetery, the weather was very beautiful. It is hard to imagine that such a thing could have happened on such a day. We also visited the death camps of Majdanek and Belzec. Majdanek sits right outside of Lublin city limits.  We were taken by surprise by the location of this camp within the vicinity to the city. The camp is extremely well preserved because of a surprise Soviet counter-attack in December of 1944. The memorial at Majdanek was unbelievably moving, the mound of ashes of the victims shows the true gravity of the Holocaust and the deadly effectiveness of the extermination. Behind the memorial there was the partially excavated trenches where the aktion “Harvest Festival” was carried out by the Nazis in 1942, on which 18,000 were killed on the deadliest day at the camp. After Majdanek, we went to Belzec death camp. The camp no longer stands there due to the Germans completely destroying it after Operation Reinhard. The memorial is where the camp once stood. To be honest there are no words to describe the memorial; one must see and experience the emotions for yourself. The Contemplation Room at the Belzec Museum gives you the sense of what a gas chamber would be like in a sense; there is no noise or anything, just utter silence, death if you want to think of it that way.

Our final part of the journey through Poland ended in Warsaw. The city was utterly and totally destroyed by the fighting during 1944 and 1945. Only a handful of buildings survived the war.  Our guide Tomasz took us through the Polin Museum on the first day there. The museum covered the whole history of Polish Jews. After that we were shown around the city and saw remnants of the few buildings that survived, including part of the ghetto wall that was pocked with bullet holes from the fighting in 1944. We got to experience the beautiful side of Poland, the scenery, food, and some entertainment from street performers. But, throughout our stay in Poland, we also came face to face with the deadly truth of the Holocaust and saw the places where endless crimes were committed.