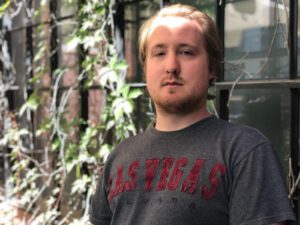 My name is Brandon. When I decided to participate on this journey I initially had only background knowledge of the Holocaust. The desire for more information, as well as first-hand experience led me to Poland.

Early in the morning of May 29, our tour group stopped to gaze at the Palace of Culture in Warsaw. It is a tremendous spire that reaches into the sky. Built in the post-war era, its history is that of Poland’s: bloody. Under the orders of Joseph Stalin, the people of Poland were forced to construct the palace in the same likeness of the Seven Sisters of Moscow. The process of construction devastated the city of Warsaw and cost numerous lives. Today it stands as a reminder of Poland’s post-war history. A history that would have been lost had the Nazis succeeded in the Holocaust.

Around mid-day we encountered a fragment of Warsaw’s past: a 10 foot high brick wall. Dotting the area around the wall were a number of memorials left by previous visitors. This was the ghetto wall that was created by the Nazis in order to concentrate Jews in a single section of Warsaw. Jews were unable to leave the ghetto when the wall went up. This was a result of Nazi Germany’s desire for a racially pure Europe. The memorials near the wall were left by people from all over the world. Their presence has proven Nazism incorrect.

In order to better understand the events of the Holocaust, one must understand the nature of people. This is one of the many lessons that I have taken away from this experience. If the Nazis had succeeded, we would not have the Europe we see today: accepting, living, and happy. That is something the Nazis never achieved.