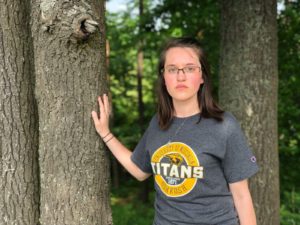 My name is Ellen and I’m a double major in History and Anthropology with a focus on the Holocaust at UW-Oshkosh. The majority of my studies have been on the three extermination centers Sobibór, Treblinka, and Belżec. Today our group visited the Majdanek concentration camp and the memorial of the Belżec extermination center.

When we went to Majdanek, I had a similar feeling to when we went through Auschwitz. At Auschwitz, you could feel the pain and suffering that occurred there. At Majdanek, with everything intact, I felt even more overwhelmed. Walking through the gas chambers and seeing the residue of the Zyklon B gas along with scratches on the walls made it feel as if you yourself were there. The whole time, I was wondering how something as horrific as the Holocaust could have happened. I continually asked myself how the victims could have the strength to hold on and to keep fighting for their lives.

Some of the barracks were transformed into displays showing various different information. Some showed the sequence of events, what cities and towns people were from that were sent to Majdanek, as well as a very touching and emotional memorial. Within this memorial they had stones and lanterns laid out and a book that listed all of the nationalities of the people who were victims there.

When we arrived at Belżec, I wasn’t sure what to expect knowing that the actual extermination center had been demolished. Once we got there and started to walk down the path between the two halves of the memorial, you could feel the impact. The walls kept getting higher and it felt as if they were closing in on you. The quote that was carved into the wall couldn’t have been more appropriate, it stated “earth do not cover my blood, let there be no resting place for my outcry.” It shows that no matter how much time has passed you can never cover up the events and lives that were taken there. I was amazed by how the memorial itself was set up.

When entering into the museum I had the opportunity to talk to a worker there and she explained all of the symbolism behind the memorial. The front walls towards the entrance represent the train tracks and where the transports stopped. The center stone that is at an angel represents the entrance of the extermination camp and is positioned between the two walk ways to form the Star of David. The lava rocks represented the ashes of the victims and the darker stone locations represent where the mass graves were located. The trees represented the demolishing of the extermination center and the final silent witnesses of the atrocities that took place there. The way the memorial is set up is incredible and has so much power.

Going to Majdanek and Belźec today reminded me of why I wanted to study the Holocaust. To keep the memory alive and to educate people on what happened, so that it doesn’t happen again. To remind people that no matter what you go through, your life is worth fighting for.