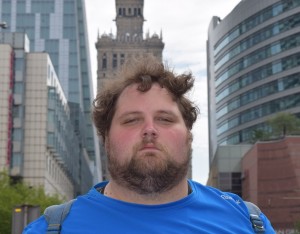 Hello. My name is William Wasielewski and I am a History major at the University of Wisconsin – Oshkosh. I’m also minoring in Geography and Political Science. The Holocaust and its effects on the world have interested me since I was a child, but particularly since we interrupted our normal school schedule in 7th grade to spend a few hours of each day, over the course of a week, learning about the Holocaust. I firmly believe its importance cannot be understated, as it shows both what hate and racism in the modern world can do and demonstrates the resilience that can be found in the human spirit. I am also on this trip as a 3rd-generation Polish-American who has family roots in Warsaw and I have always wanted to return to my motherland.

Today we visited the many memorials and plaques dedicated to the Warsaw Ghetto as well as other peripherals of the Jewish community which once existed in Warsaw. Warsaw wasn’t like the other cities we visited (Lublin and Kraków). Its Jewish community was only around 140 years old when WWII started. However, it was booming. At the start of the war, the only city in the world with a larger Jewish population was NYC. This can be exemplified by the Jewish cemetery in Warsaw which is still standing; it has over 220,000 people buried there, most of them from before 1945.

One of the biggest takeaways of our trip to the areas of the former ghetto today was that even if a time of such despair there were still heroes. There were multiple statues of Janus Korczak who was the director of the children’s orphanage in the ghetto. When the Nazi’s came and said they were going to send the kids to the east for a better life (a euphemism for the extermination camp Treblinka), Janus refused to let them take the kids by themselves. Instead, he willfully accompanied the children to their death in Treblinka, comforting them the entire time. To willfully go to your death to ease the pain of others truly shows the heroism of some of the Jews of the Warsaw Ghetto.

One final note about many of the memorials we saw today around Warsaw is that many of them shared a similar theme. These memorials, such as the one at Umschlagplatz (where the Jews of the ghetto were shipped off to Treblinka) contain a very large open space in the monument. This is to signify hope. Even in the darkest hour of humanity, it’s important to have hope. Before I came on this trip I didn’t understand how people could have survived the Holocaust or how they could hold on to any hope. I’m not sure if I understand any better now but I do know now how important it was to those who survived and how important it is today. View the trip’s photo album here.