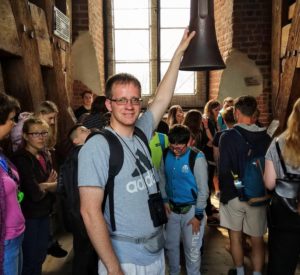 Krakow. We visited the Wawel Castle where we learned about its history and what life was like for those who lived there. In addition, we learned about how Poland honors its national heroes and patriots including those who fought in the American Revolution as well as in the Polish resistance during WWII.  I was amazed and intrigued by how former Polish leaders, priests, and bishops were entombed with magnificent coffins lined with wood or stone engravings, as well as their continued reverence among Poles.

After visiting the castle, we visited the Jewish Quarter of Krakow. We stopped at the Jewish Community Center and spoke with a representative of the Krakow JCC, an American expatriate named Jennifer. She told us the origin story of the Center and how Prince Charles came to Krakow and asked the local residents what they needed. The response of these residents, including Holocaust survivors, was that they just wanted a place for their community to gather.  After much effort, the JCC was established and exists as a place for Jews living in Krakow to come and be a community.  It provides educational services for children and even those curious about Judaism.  As of 2018, the Center has helped revive the Jewish community in Krakow and can possibly help the Jewish population of Poland and elsewhere engage in the communities in which they are a part of.

Finally, we visited several synagogues that, within the past 20 years, have been restored and renovated after decades of neglect and desecration. We learned how the synagogues were founded and what their significance was within the community as well as, unfortunately, how they were used by the Nazis during the occupation of Poland during WWII. After seeing the synagogues we visited a memorial dedicated to those who died with the liquidation of the Krakow Ghetto and subsequent deportation to Auschwitz. The memorial was a series of chairs spread out over a square in Krakow. It was to symbolize how during the liquidation, Jews were forced to stand or crouch and were not allowed to sit or lay down while waiting for the train to take them to Auschwitz or other death camps. They risked being shot if they did. Our local guide pointed out that while it is good that the Jewish community and the city of Krakow is trying to move on from its past, it is important to not forget what happened. I agree with our guide’s assessment that if we do not remember what happened or ignore it, we run the risk of repeating the Holocaust again. But as the Holocaust is being taught, re-taught, and discussed on a regular basis, the chances of it happening again are lowered, but it takes constant vigilance in order to prevent it from occurring again.