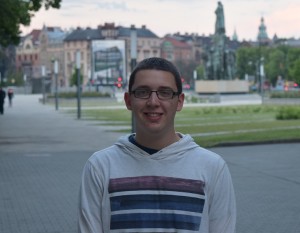 Hello, my name is Alex McCarville and I just finished my sophomore year at University of Wisconsin Oshkosh. I am an accounting major with a minor in political science. I grew up in the Madison area. I have become increasingly interested in traveling since I started college. This study abroad experience is my second time being out of the United States, and my first time to Europe. Last summer I went to Haiti for a service immersion trip. Aside from traveling I like hiking, biking, and kayaking. I plan to do as much traveling as I can throughout my time in college, and hopefully travel for work once I graduate. I hope to get a job at an accounting firm once I graduate.

Our tour guide met us at the hotel at 9am for our tour of the city. She told us a lot about the famous and most important people of Krakow, which was very interesting to learn about. One place we saw was the home of the pope, John Paul II. We also learned that the surroundings of the old city used to be surrounded by a wall, but then it was torn down and made into a park. Our destination for the day was Wawel Castle. There was a church within the grounds of the castle. It was a very beautiful place, with tombs of various kings, including Casimir the great who brought Jews into the community despite his role in the Christian community. We then moved on to the castle. The most interesting part of the castle that I learned about was in the 17th century, a king was doing an experiment, and accidentally set part of the castle on fire. When it was restored, that part of the castle was rebuilt with 17th century art and design, so that part looks a little different than the rest of the castle. There were tapestries around the entire castle, which depicted testaments shared by the Christians and Jews. Everything we saw was only relating to the Old Testament, which allowed for Jews to feel more welcomed into the community.  View the trip’s photo album here.