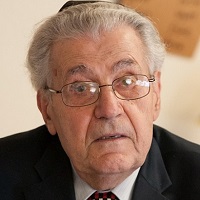 Howard Melton was born in Kovno, Lithuania on February 13, 1931. He was 10 years old when the war began and was immediately forced into a ghetto. Howard, his mother, and his two sisters were then sent from the ghetto to a labor camp in Latvia to help build the airport. Once there, he volunteered to work on a farm. Howard’s younger sister was sent to Auschwitz in 1943 where she was killed in January of 1945. His mother and older sister were both killed in Stutthof. Howard was sent to the Dachau concentration camp where the conditions were very harsh and people suffered from hunger and exhaustion. In 1945 he was forced to march for ten days. At the end of the march, Howard was rescued by the American troops who were very kind and gave Howard hamburgers and chocolate. At age 14, Howard weighed only 55 pounds. Both Howard and his father survived the war.

He moved to New York City in 1949, but later moved to Milwaukee to be near his friend, Albert Beder. Soon after in 1950, he joined the Air Force and was married in 1951.